When most people think of baby food, they think of Gerber. Indeed, even after decades Gerber remains the #1 baby food (non-formula) brand in the U.S. with an estimated 60% market share. But lately, big changes have hit the U.S. baby food market, which has been combating several years of declining sales volumes. Consumers are increasingly turning to homemade purées or inexpensive store brands (sales are up by more than a third since 2010). 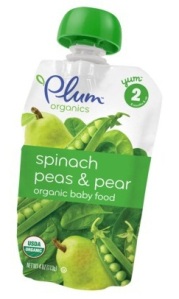 The biggest story, though, is the sterling success of organic label Plum Organics, a brand that has drawn significant attention both for its product and its broader social mission. By 2012, Plum had the #2 organic baby food brand, with reported sales of $93 million.

That drew the attention of packaged-foods giant Campbell Soup Company, which in May 2013 acquired Plum from its parent company Nest Collective for $249 million. More recent numbers are hard to come by, but sales are certain to have grown due to increased distribution (backed by Campbell’s scale and muscle) and Plum’s claims to now have the #1 organic baby food brand.

And while demonstrating some element of corporate responsibility is de rigeur for food companies these days, Plum goes a step beyond most by talking extensively about its mission to combat childhood hunger. Their website touts their donation of over 4 million organic meals and snacks through a network of non-profit partners across the U.S.

Most notable is its status as a “benefit corporation”, a relatively new legal designation that allows companies to pursue social good and environmental benefits, not just maximize profit. What’s notable is Plum achieved this status in August 2013, months after the company had become part of Campbell. This kind of innovative arrangement may put the lie to doubt of a large processed food company’s ability to be steward of a well-known do-gooder organic brand, and certainly bears paying attention to for the future of the food industry.