Voters in two California cities went to the polls on Tuesday to decide on an issue of critical important to the food and beverage industry: special taxes on the consumption of sugary beverages, which are the largest source of added sugar to the American diet, and are increasingly blamed for their contribution to obesity and diabetes. Yet similar propositions had always failed in the past, whether in big cities like Philadelphia (2011) or small towns like Telluride (2013), in part because the beverage industry has spent an estimated $100 million in the past five years fighting such legislation. 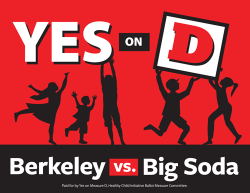 Nonetheless, Berkeley, CA, just became the first city in the U.S. to approve such a measure, with 75% of the small town’s voters passing “Measure D”, a one-cent-per-ounce tax on sugary beverages (non-diet sodas, energy drinks, juices w/ added sugar). The vote had been closely watched for weeks, with the beverage industry spending an estimated $2 million — or $30 per Berkeley voter — in an attempt to defeat the measure. Pro-bill backers were bolstered by a late infusion of cash from former NYC mayor Michael Bloomberg, who in his former position spearheaded an ill-fated fight against sugary drinks.

However, in much larger, neighboring San Francisco, a similar “Measure E” which would have charged two-cents-per-ounce (double the rate of Berkeley’s tax) failed. It did so, though, owing to a legal quirk — because the measure earmarked the tax’s funds for specific uses, a two-thirds majority was required for it to become enacted. “Only” 55% of city voters turned out in favor of the tax, after the beverage industry outspent pro-tax advocates there by a 30-to-1 ratio, a result certain to leave the Big Soda manufacturers nervous about sugar someday becoming as vilified as tobacco (a heavily-taxed and regulated product).

After all, consumption is already down an estimated 5% in soda-loving Mexico (the only country with a higher per-capita consumption rate than the U.S.) since that country introduced a tax on soft drinks at the beginning of the year. Consumption is reportedly down in France, which passed a soft drinks tax in 2012, as well. For the broader food and beverage industry, a longer-term concern exists over whether sustained successes with this type of tax may then prompt further scrutiny of other product categories outside of soft drinks, or scrutiny along other nutritive measures (e.g. sodium, fat).

This entry was posted on November 6, 2014 by Jay Nargundkar in Health & Nutrition, Manufacturers and tagged legal, soda, soda tax.