As Soda Lags, Coke Looks to Energize Its Portfolio

This week, Coca-Cola shelled out a little over $2 billion to acquire a 16.7% stake in Monster Beverage, best known for its eponymous energy drink. In a bit of a complicated maneuver, Coke is also trading its own, far smaller energy drink brands (e.g. NOS, Full Throttle) to Monster for them to manage, while receiving in return Monster’s non-energy brands (most notably Hansen’s natural sodas).

Coke has been linked to Monster for a while now, and indeed, some are surprised they didn’t just buy Monster outright. Instead, the deal includes a provision that allows Monster to block Coke from increasing its stake in the company beyond 25% for the next four years. Perhaps it means that Coke is still wary of some of the negative health perceptions about energy drinks and the more extreme brand image that accompanies Monster — very different from Coke’s own wholesome, family-friendly image.

In any case, it’s another example of Coca-Cola diversifying away from its core soda brands in the face of changing consumer habits and an obesity health crisis. An excellent profile last month in Bloomberg BusinessWeek revealed how Coke’s leadership is scrambling to provide alternative options. Some of these options are in-house, like the rumored arrival in the U.S. of a stevia-sweetened product called Coca-Cola Life, already available in very limited locations abroad. (It may not get much traction here due to too many other options, as well as consumer dissatisfaction with stevia’s taste profile.)

There’s also the company’s ongoing experiment with “mini-cans”, which have supposedly seen “strong growth” — but still make up only a small share of the company’s overall sales. A better bet may be the fruit of Coke’s investment earlier this year in Keurig, if they can next successfully release a machine that allows consumers to make single-serving Coke drinks in the comfort of their homes. 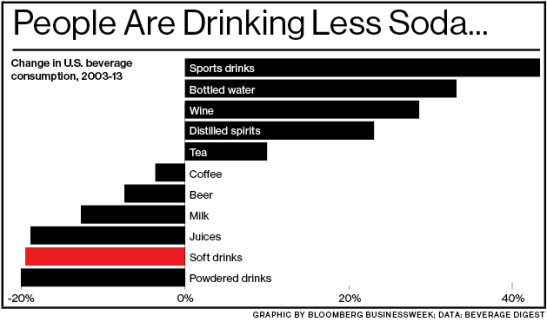 Realizing that rapid growth from within has proved difficult, Coke has increasingly been taking a look at smaller beverage players who are doing well — and seeking to bring them into the fold. This week’s Monster investment is a bit rare for its size, but follows a pattern followed frequently by Coke since they launched their Venturing & Emerging Brands (VEB) unit in 2007 to build relationships with promising start-ups, invest in them (potentially purchasing them outright in the future), and help them grow.

Whereas Monster is an established player with a market cap north of $15 billion after Coke’s investment, the VEB has ideally looked for “regional brands with at least $10 million in sales” and has an audacious — and still unrealized for its brands thus far — goal of growing them to $1 billion in sales. To date, key companies that Coke has bought are The Honest Company (makers of Honest Tea), Fuze Beverage (Fuze tea, NOS energy drink), and Zico (coconut water). They have also launched a joint venture with Italian coffee brand Illy, called Illy Issimo, and bought a partial stake in Core Power, maker of protein shakes.

2 comments on “As Soda Lags, Coke Looks to Energize Its Portfolio”